Looking Out For Juan Another

The Young & Young Once Talk About Fake News 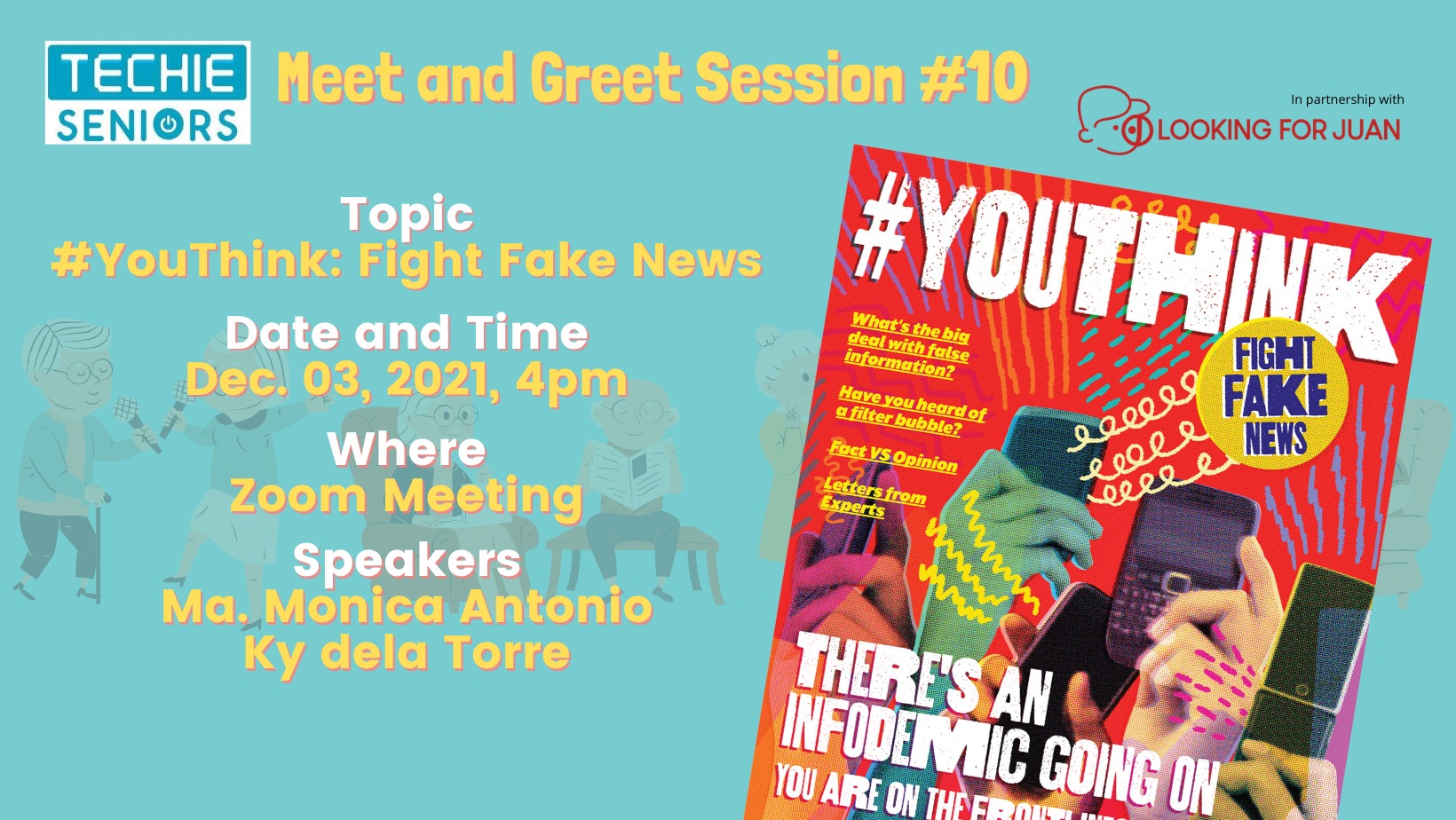 “The only difference between being uninformed and misinformed is that one is your choice and the other is theirs.” ― Frank Sonnenberg, Listen to Your Conscience: That’s Why You Have One

The Internet is one of the greatest technologies to transform our societies and economies. Given the vast expanse of the digital world today, the opportunities it offers also seem endless. This makes the Internet essential not just to digital natives, but across a broad demographic of digital immigrants. However, the breadth, depth, and accessibility of the online platform are also associated with several obstacles. Digital ageism, for instance, can leave vulnerable communities ill-equipped to identify risks online. Excluded from the conversation surrounding the digital world, many are prone to Internet hazards, including perhaps the most compelling of them all — fake news.

So it’s only apt that Techie Senior Citizens and Retirees Philippines, with its mission of empowering senior citizens in navigating the various aspects of the web, organized a forum that addressed the issues surrounding fake news. Entitled #YouThink Fight Fake News, the activity also served as the 10th Techie Seniors Zoom Meet & Greet Session.

True to the collaborative nature of the organization, Techie Seniors PH tapped Looking for Juan, an online store known for reimagining the Filipino culture of gift-giving. Working closely with local writers and artists, Looking For Juan boasts an extensive catalog of children’s books published by CANVAS that celebrates Philippine culture, art, and literature. Its corporate social responsibility of alleviating functional literacy among Filipino children, on the other hand, is carried out through a Buy 1, Donate Books to Juan program. Here, every purchase from the store is matched with book donations to disadvantaged Filipino children. You can read more about the program here.

With their emphasis on literacy, Looking For Juan carries titles that include #YouThink: Fight Fake News — the inspiration behind the Zoom Meet & Greet title — a magazine-style activity book designed to help Filipino youth identify false information in its different forms. For the Techie Seniors PH community event, the magazine’s contents were brought to life by Ms. Maria Monica Antonio and Ms. Ky dela Torre, guest speakers from Looking For Juan.

Ms. Antonio, a graduate of Creative Writing in Filipino from the University of the Philippines–Diliman and an experienced editor, is the communications head for Looking For Juan. In her talk called “Spot Misinformation in Written Content,” she unpacked the features of fake news by providing tell-tale signs of these misleading stories.

According to Ms. Antonio, there are several types of false information. These include the more well-known forms like Impostor (stories and websites that pose as legitimate sources but are often marked by grammatical errors and improper formatting), Emotional (stories designed to heighten or stir a reader’s emotions), Trolling (content that aims to elicit strong emotional responses that confuse readers), and Conspiracy (news or stories that explain events as conspiracies by organizations, typically state institutions or powerful groups, with nefarious motives).

However, there are also unfamiliar but prevalent faces of misinformation. Polarization, which aims to divide people into two opposing groups, is a common tactic of fake news peddlers, particularly in the arena of politics. There is also Intentional Deception where news or stories explicitly attempt to destroy the reputation of an individual or organization. But they can also appear as clickbait articles that lure the unsuspecting reader to misleading websites and even fraudulent content. Lastly, Ms. Antonio shared how Biased Writing is also a form of misleading content. While they don’t necessarily use false information, she shared that Biased Writing only showcases one side of a story, which may prove inaccurate and incomplete.

To help the Techie Senior members be on their toes against fake news and information, Ms. Antonio shared a simple yet easy-to-remember acronym — ESCAPE1. When evaluating the veracity of a story, readers are encouraged to check the Evidence, look at the Source, understand the Context, identify the Author, see the Purpose, and evaluate the Execution. To put the learnings into practice, Ms. Antonio tested the attendees by showing sample headlines they needed to categorize as fake or real news using Zoom’s poll feature. Despite the brief session, most of the Techie Senior members successfully identified the fake news consistently.

False information, however, doesn’t only appear in the written form. Images and videos are increasingly being edited and manipulated in a bid to spread misinformation. Ms. Ky dela Torre, a Quezon City-based illustrator and student currently studying Visual Communication at the College of Fine Arts from the University of the Philippines–Diliman, took on the cudgels to brief Techie Seniors PH members on misleading media. According to Ms. dela Torre, the ability to spot fraudulent media is critical, as these fake images and videos can lend credibility to fake news.

Her talk on “How To Spot Fake Images and Videos” focused on three brands of fake photos. Altered Pictures or Videos are perhaps the most common and are typically seen in hoaxes. Using readily accessible editing tools, images can be edited to cause a variety of responses — fear and panic being the most common. Video manipulation has also increasingly advanced, leading to worrisome technology like Deep Fake. In this case, video or audio recordings are manipulated using artificial intelligence to show personalities saying or doing something they never did. On some occasions, high-profile personalities are superimposed on these “synthetic media”. These computer-generated images or videos are highly realistic with a great potential to deceive and mislead viewers.

Lastly, real images can also be used but outside of their original or proper context. These Out of Context photos, like Deep Fakes, can easily come across as authentic. Similar to altered pictures, the “viral” nature of these photos means they can spread like wildfire across the Internet.

So how should Techie Seniors PH members respond to these images? Unlike in written content, proper vetting of digitally altered photos or videos is more challenging. In a research by the Harvard Kennedy School on images in online visual environments, the literature showed that “Visuals are detected and processed very quickly by the human brain. They are more easily remembered, shared, and are often more persuasive than words.”2

For the discerning senior citizen, however, Ms. dela Torre offers some basic pointers. Fake images, for instance, will show tell-tale signs of manipulation. While carefully looking at the picture, a user might be able to spot distortions, including inconsistencies with the font used, strange cropping or angles, and surfaces or textures that don’t go together. Checking sources is also essential. Although advanced image verifying tools are available, Ms. dela Torre recommended Google Images’ reverse image search features that allow users to upload images and get search results related to that specific image. If one mistakenly shares fake photos, Ms. dela Torre suggests a simple remedy — say sorry, remove the photos, and move on. She says that in these situations humility is a virtue.

Like the talk on fake news, Techie Senior Citizens were also tested in their ability to discern fake images. While more difficult than assessing news headlines, members were able to identify digitally altered photos and videos. One of the attendees, Sir Ed Rivo, was quick to call out a Deep Fake video even before the topic was discussed. It’s a testament to the progress in digital literacy among the senior citizens of the group.

True to its reimagining of the Filipino tradition of gift-giving, Looking For Juan organized a quick raffle for the participants. Techie Seniors PH member Nonita Peteros was the lucky winner of a Malay(a) limited edition postcard book. After the two talks, Looking For Juan also surprised Techie Senior Citizens by giving away copies of the #YouThink Fight Fake News activity book for all attendees. 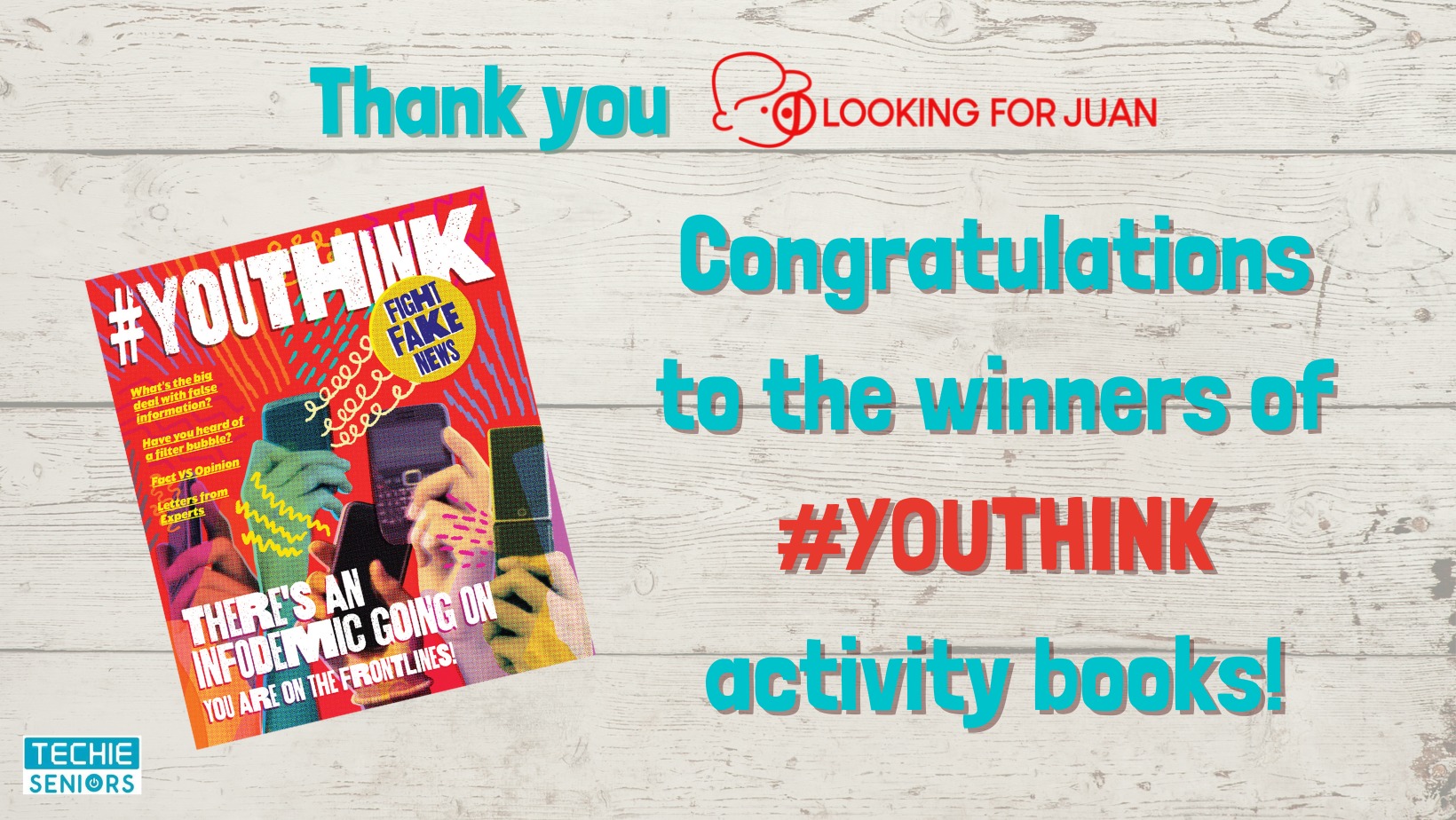 The latest edition of the Zoom Meet and Greet Session culminated with a few words from Ms. Koree Monteloyola, founder of Techie Seniors. While she initially expressed worry that the members might struggle to recognize fake content, she was happy to see the senior citizens well-equipped to identify false information, stories, images, and videos. Ms. Monteloyola also took the opportunity to introduce Ms. Max Lumbera, the new community manager of Techie Senior Citizens. With Ms. Lumbera on board, the Techie Senior Citizens community moves towards a much broader goal of sustained online community growth and stronger engagement with empowered digital migrants.

For Ms. Monteloyola, the entire activity emphasized the need for collaboration across generations. The latest Techie Senior virtual session is a step towards bridging generational gaps where both the young and young once engage in meaningful conversations and open eyes and ears to new learnings and experiences. Like modern-day Bayanihan, the virtual event recognized the importance of helping and looking out for one another in ways that help strengthen the efforts and meet the objectives of Techie Senior Citizens.

2 Research note: This photograph has been altered: Testing the effectiveness of image forensic labeling on news image credibility (https://misinforeview.hks.harvard.edu/article/research-note-this-photograph-has-been-altered-testing-the-effectiveness-of-image-forensic-labeling-on-news-image-credibility/)